Like what you hear? Fancy having a go yourself? Get in touch via our Twitter site @fusiononair

I've had a couple of people ask me for the track list from the "Chunk Of Funk" set.  It's listed below, but first I thought I'd take a short while & explain my thinking behind choosing the songs that I did.

The starting point was the music had to "move" me.  I wasn't going to try and be too clever & fill it with obscure or lesser-known tracks.  Every day on twitter I see tweets from people who I respect with far more knowledge and passion than me posting wonderful music that I've never heard before.  I would be lying if I said I hadn't drawn from some of these posts.  But in the main I went with music that I already knew, and every track had to fill at least one of the following two criteria:

1:   I had to feel it "through my feet".  And yes - I am to dancing what Donald Trump is to diplomacy.  But I care not a jot.  That person sitting down laughing at you as you make a fool of yourself dancing secretly wishes they were dancing too.

I also decided very early that what this set didn't need was some bloke with a microphone gobbing off.  It was about letting the music do all the talking.  Yes - there's the odd jingle thrown in, but that's a handy tool to fall back on when you want to play a certain track next but can't mix the bugger in properly!

So here we go - here's the full set list.  20 soulful funky songs that I enjoy listening to.  Songs that move my feet or my heart (or both).  Songs that make me smile, that give me happy memories, or remind me of special people and places.

And then one more song at the end.  A song that everyone should sing softly to the person they love while dancing with them.

And if that makes me sound soft - as I said above concerning the dancing - I care not a jot. 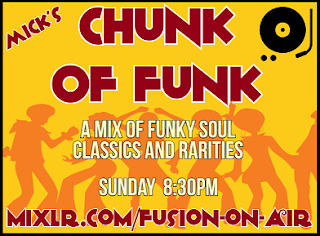 Should you feel the need, you can listen back here:  Mick's Chunk Of Funk
Posted by Fusion On Air at 06:37 No comments:

All the truly good ideas are worth nicking.  And that's exactly what we've done (albeit only for the next two Sunday nights). 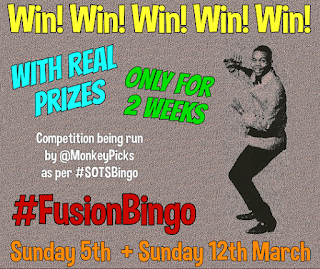 Anyone who follows @MonkeyPicks on twitter will be aware of the wonderful thing that was #sotsbingo.  It was a regular staple of many of our Saturday mornings,  and something that, along with the great Brian Matthew presenting, will be sorely missed.

But Monk, being the good egg that he is, has agreed to dig out his notebook for one last hurrah.  Over the next two Sunday nights (5th & 12th March) he'll be doing #FusionBingo.

For those of you who don't know the rules, it's dead simple.  Simply chose 5 artists that you think might be played on the Sunday night, and tweet them in advance to Monk along with the hashtag #FusionBingo

Whoever gets the most correct wins.  And there are real prizes to be won - more of that in a bit.

Both Mick & Ed's set-lists are already decided and sealed, and known only by them.  Nobody else knows, nor will they.

No artist will be repeated, so if Mick plays a particular band they won't be on Ed's set the following week.

Scores will be totted up over both shows, so even if you do badly - or don't enter the first week - you'll still be in with a chance of winning, as whoever has the most points after both shows will be the winner.  It's one game spread out over two weeks.

Normal rules apply - in the event of a draw, the artist deemed by Monk to be the most obscure choice will get the casting vote.

Just about all the songs will be from the 1960's, with maybe an odd excursion into the late 50's.

Finally. you'll have to be logged in to the FusionOnAir chatbox on Mixlr here on at least one of the Sundays if you want to win the prizes.  And there'll be a prize not only for the winner, but also the runner-up.

And what prizes can be won?  You'll have to wait & see for now.  They'll be announced on Sunday night, but suffice to say they've been chosen with music and clobber in mind.

So don't just sit there reading this - have a go.  Tweet your entries to Monk along with the hashtag #FusionBingo

And good luck.
Posted by Fusion On Air at 12:44 No comments:


When we were toddlers, a lot of us will have spent our time drawing pictures, or playing with Plasticine, or burying our faces in bowls of jelly or similar.  I think it's fair to say Lee would have had little time for such frivolity.  He would have been too busy with his Fuzzy Felt.

Although Lee's tastes clearly encompass a wide range of music, it's obvious that his first love was, and still is, big bold fuzz-drenched beauties.  And that was reflected on Sunday night as he brought us the latest instalment of his "It's What's Happening" sets.

This was not a set for gently listening to with a nice cup of tea - it was Jack Daniels all the way, and cried out to be turned up as loud as your ears could handle it.

Lee opened with The Rivieras "California Sun" - surely one of the greatest feel-good records ever - and kept that feel-good factor throughout, including - among others -  a smattering of soul, a chunk of rock n' roll, and the sublime vocals of Gene Clark and Lee Hazelwood, both of whom's voices could melt tungsten at a hundred yards.

He also included a great new track from The Black Doldrums, a band new to a lot of us who listened, but noted as ones to keep an eye on for the future.

But this was a set that was heading inexorably towards those aforementioned fuzz drenched beauties, none more so than his penultimate track, The Gremlins' raucous crashing version of "High Time Baby".

Lee brought the set to a close with Jackie & LaVern's naughty version of "Think Twice", a track guaranteed to put a smile on the hardest of faces.  But by then we'd been smiling for ages.

The full set-list is shown below, and there's a link afterwards that will take you to the @fusiononair  Mixlr showreel page where you can listen back. 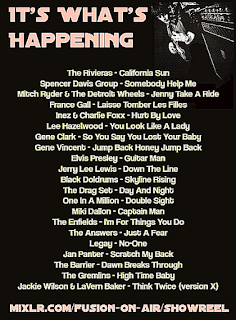 Sunday night saw the welcome return of The Doc (Nick Beckett) with his Medicine Bag.

If you needed one phrase to sum up The Doc's shows, that phrase might be "predictably unpredictable".

It was - as always with Nick - a meandering journey of top-notch music, that took us from Georgie Fame's classic September 1963 gig at The Flamingo to the title track from The Doors' seminal '71 album "LA Woman".

Along the way he served up a feast of wonderful sounds, encompassing Soul, R&B, Funk, Garage and more, with a couple of newer tracks thrown into the set for good measure.

The Doc never lets you down.  Ever.  His sets are always bang on the money.  He'd never admit to the amount of effort he clearly puts into preparing them, but it's obvious that he does.  Entertaining, informative, and delivered in his own uniquely engaging style.

If there had to be one criticism, it would be that he's never fully grasped the concept that there's only supposed to be 60 minutes in a one-hour show.  But we'll forgive him that.  Again!

The full set-list is below, and there's a link at the end that will take you to the Fusion showreel page on Mixlr, where you can listen back to it. 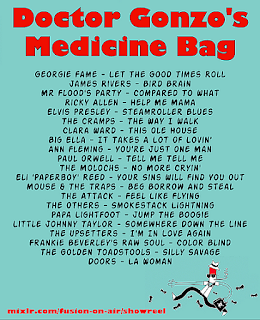 Listen here:  http://mixlr.com/fusion-on-air/showreel/
Posted by Fusion On Air at 01:50 No comments:

"It's Sunday night - you're listening to Fusion - and tonight we've got another Sunday Set for you".

Just 16 words, but 16 words I love saying on a Sunday evening.  It means that you're about to hear another set of tunes that someone has taken their time to think about and commit to broadcasting.

At one time or another we've probably all done some sort of list of our favourite songs.  But try doing a list of about 20-30 songs now.  Then try it again in a few weeks.  I bet the lists would be different.  Mine change daily dependent on what mood I'm in, what I've been listening to, what I've just "discovered" through someone tweeting something I'd never heard before etc. etc.  And long may that continue.  The thought of never being open to something different is something I can't contemplate.

But what a playlist can, and does do, is give us a snapshot as to what someone was listening to or enjoying at a certain time.  It can also often tell us about a person's musical memories as they grew up.  And I'm constantly privileged that people wish to share those memories.

Last night Neil - or Zyd as he's known - shared some of those memories in his "Head Scratchers" set.  He chose the name Head Scratchers as he spent days scratching his head thinking of songs to include, along with the reasons why he chose them.  It was a blinding set of music, and a joy to broadcast.

The set-list is below, and you can listen to it by clicking on this link: 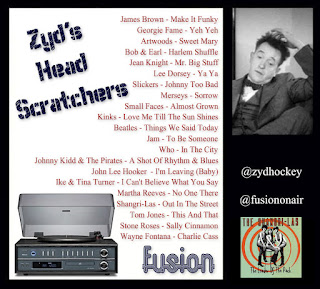 Mick
Posted by Fusion On Air at 04:10 No comments:

Album review from the NME dated March 4th 1978: ..."an accurate documentation of the most interesting year the '70s have so far offered." Don't think I can argue with that! Just got to find a copy now... off to eBay! 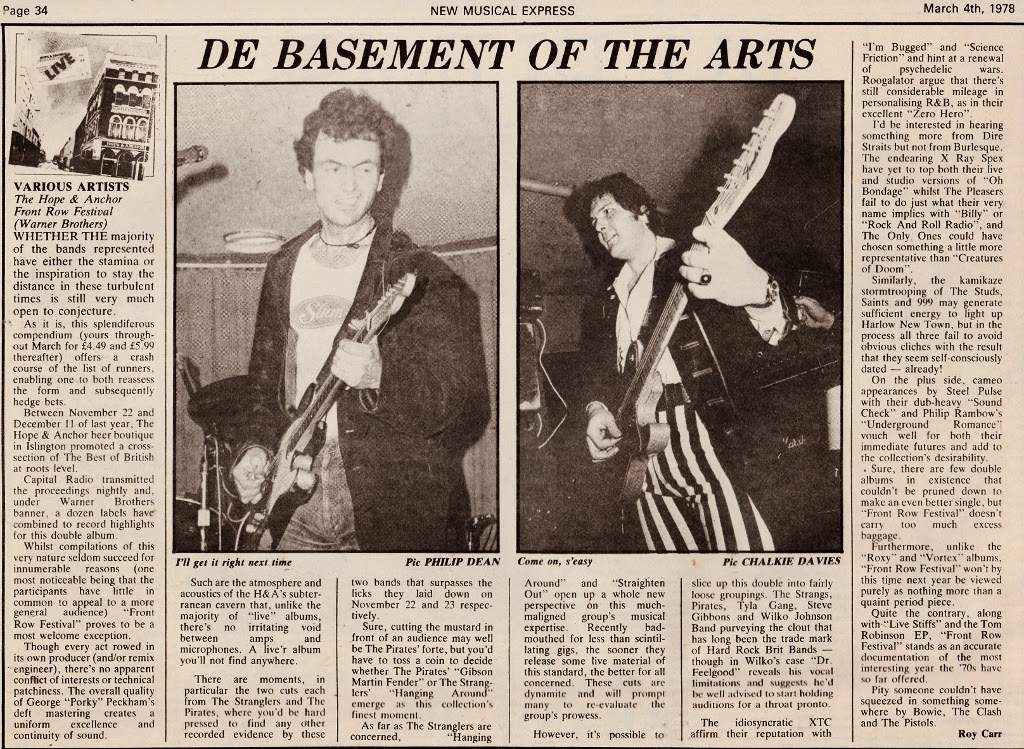 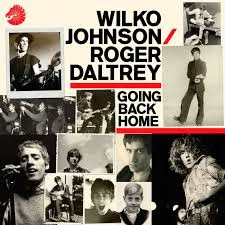 Further details can be found on Wilko's website and the album is available on vinyl for those of us 'of a certain age'!

Without fail every Fusion contributor who has had a listen so far has given it a resounding thumbs up. The Doc summed it up perfectly for us: "Going Back Home is a fitting final chapter for Wilko; his guitar and Rog's vocals meld really well, top notch Rhythm & Blues!!" Highly recommended.
Posted by Fusion On Air at 10:00 No comments:

Email ThisBlogThis!Share to TwitterShare to FacebookShare to Pinterest
Older Posts Home
Subscribe to: Posts (Atom)
Fusion... because life's too short to listen to bland music.
If you want banging techno, or you're looking to 'ave it large, then you have come to the wrong place my friend.
However, if you want a mix of music that gives more than a nod to mod, then you should feel at home right here.
A family of friends doing it for one simple reason. We love the music.
No egos, no adverts, just the music.
Follow us for the latest updates on twitter @FusionOnAir